Every year since I started duathlon, the Rose City Duathlon (formerly Welland) of the Multisport Canada/Recharge With Milk Triathlon Series has been a favourite on the circuit. Uber-biker Erik Box won it in my first season is a blazing fast 1:24:04 time, and I was able to take the win last season after executing one of my best ever races in a time of 1:24:34 on a very hot day. The flat and fast course lends itself incredibly well to a drag race. It is a fantastic last tune-up prior to the big races of July in Ontario. On another interesting note, as far as I can tell the course record is held by my coach Tommy Ferris, in a quick 1:23:33 time.

I will be returning to Welland this upcoming weekend with what I hope is an improved bike split. After a relatively slow start to the Ontario duathlon scene where the close finish has been a rarity, the early confirmation list promises an interesting and competitive race. The overall winners at Woodstock (myself), Milton (Grahame Rivers), and Binbrook (Larry Bradley) will all be in attendance, and who knows what wild card will reveal itself on race morning? Here is what each of the contenders will need to do to win the Battle of Rose City (please excuse me writing about myself in the 3rd person below…it just sounds better in this context!)… 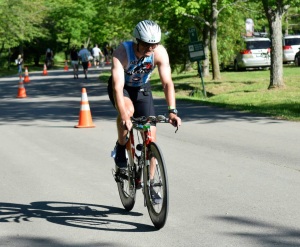 Strength: A complete racer. Larry is the most experienced contender, and that shows in his solid bike and run over the years. Larry will always consistently have close to the fastest splits in both disciplines. Larry continued that trend of running a complete race in Binbrook this past weekend.

Weakness: The second run. If Larry has a weakness, it is a wild card on the second run. Though Larry is generally strong all the way through the race, he has occasionally had hiccups running off the bike if he is forced to dig too deep on the bike, which can cost any duathlete a race.

How Larry wins on Saturday: Strong second run. If Larry is to win on Saturday, he will have to keep up a steady performance from start to finish line. With strong runners coming from behind, Larry will have to stave off the heat and dead legs from 2 weekends of racing to come out on top.

Strength: The bike. What race is complete without the stud cyclist? Grahame is new to the sport, but has stepped in nicely as the guy everyone looks over their shoulder for after T1. A reigning provincial ITT champion, Grahame is always good for a smoking bike split.

Weakness: The run. As a pure cyclist before this year, Grahame has had a steep learning curve. Some race experience surely helped him turn a 4th in Woodstock into a win in Milton. Hopefully Grahame can carry over his cycling fitness to take his run up another notch on Saturday.

How Grahame wins on Saturday: Crush the bike. Even a consistent 4:00/km pace on the run means Grahame may be starting the bike 3 minutes behind, needing a 3 minute lead out of T2 to hang on. Can Grahame knock a further 3 minutes off his bike split from Milton and scare 40:00 on Saturday before hanging on for the win?

Strength: The run. Over his short career, Jesse has become well-known for his foot speed. That is his ace in the hole, as he regularly post the top run splits in races. The question on Saturday is whether or not his bike is strong enough to keep him close enough to unleash that second run.

Weakness: The bike. As a classic former track runner, Jesse is still learning how to get the most out of his cycling. A strong bike leg still leaves him with minutes to make up on the second run. He has improved over the past year, but will that continue on June 14? We shall see…

How Jesse wins on Saturday: Minimize losses on the bike. Last year he was able to come out with a win in Welland because he was able to keep Erik and Larry close on the second half of the bike. Will a similar strategy work this weekend in his title defense?

The great yet terrifying thing about duathlon in Ontario is that you just don’t know who you will be racing until you get to the start line. Will Erik Box emerge from the abyss to take another shot at the course record, adding another uber-biker to the field? Will Bruce Raymer attempt to follow up his great duathlon debut with a second in Welland, adding another rabbit to the start line? Will Richard Eyram decide to dust off his P3 and running shoes, joining Larry as another solid and complete racer that just cannot be ignored? Is there another unknown out there who is planning on crashing the party with a big debut? Still so many questions, ones that will hopefully be answered before we all toe the line, but many that will be up in the air until the dust settles. All we can be sure of is that we are in for a heck of a race!