Quote from JJ Watt, defensive lineman for the Houston Texans

The first snowfall in Hamilton has come and gone. Since my last update I haven’t been up to much of anything new, but as that fresh layer of snow fell to the ground, so too did I start fresh on this journey that I have undertaken.

2014 was generally good to me. I won some races, had some new experiences, made some new friends, and generally got to watch the sport of duathlon take a small step forward as we try to get the sport out of the increasingly large shadow of big brother Triathlon. It was incredibly enjoyable and rewarding to watch Duathlon Central grow and see the community get behind it and generate some awesome discussion. Armed with this, we can move forward and hopefully influences some change for the better in our sport!

But you came to this page to hear me ramble about me and what I have been up to! I’ve been chipping away, spending the last few months catching up on all of those areas of life that lag during the summer season. My last two months of training have been a mixture of “completely off”, “unstructured” and most of all…”fun”. Over the past few years of hard, long, grinding duathlon seasons, I have discovered that I have a need following the season to spend some time “playing duathlon”.

“Playing duathlon” atop the Sydenham Rd climb in Dundas

I hang my TT bike up on the wall and ride my road bike, display nothing except distance and time on my bike computer, stash my Garmin in my pocket while running to run otherwise gadgetless, and spent some time training for the pure enjoyment of it. I had a ton of fun with my road bike, rode some routes that I tend to avoid during the season, ran as fast or slow as I felt like, and generally trained when I wanted to. Physically, I may not have needed the rest, but I find that doing this is the best way to get myself recharged mentally and excited to train hard again.

However, now that I have had my fun, it is time for brass tacks. The road bike has replaced the TT bike up on the wall for a little while, and the “pain cave” is open for business once again. 2015 is a make or break season for me, and I will be leaving no stone unturned this offseason as I continue to pursue my professional ambitions in the sport of duathlon…the theme of 2015 is “Marginal Gains”. Tentatively (things can change on the slightest whim in duathlon), I have targeted “A” races in early June (USAT Duathlon Championships, Standard/Sprint double) and late September (Esprit Montreal and possibly Powerman Michigan). The rest of my race plan is TBD until the schedule firms up, hopefully sometime in early 2015. Additionally, I have the following, non-race specific goals: 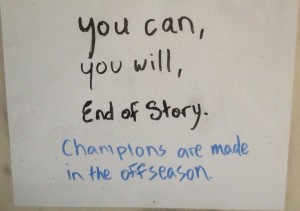 I plan to address this weak point with a three-pronged approach:

Yes that is a disc cover on my trainer…I am using my indoor time to test aero bento packs, saddles and electrical tape!

Many gains are to be had for those who reach out and take it. The winter offseason is an opportunity, not an obstacle, and I intend to come out of it an entirely different racer, chomping at the bit at every start line I toe in 2015.