Well, the first big month of the Canadian duathlon season has come and gone, and I can say objectively that it has been a good one. The Coupe du Quebec is absolutely smoking this year, and intriguing new contenders and huge races have popped up from the world of bike racing in B.C. and Alberta. Here’s a quick run-down of some of the races this past month (a longer update to come after this weekend):

I would say that Ontario better look out after some of these results, but many in the Great Lakes province have had their eyes firmly fixed all year on the Multisport Canada Gravenhurst race weekend. It is the Triathlon Ontario championships for both sprint and standard distances, and also hosts TO’s popular Du-the-Double Challenge. While only being a provincial championship, the duathlon community has embraced it as an annual event to look forward to, and it is typically one of the best-attended events in the country. As this moment there are 71 athletes registered in the standard and 65 in the sprint, with several more still deciding on their race distance and will likely register in the coming days. So what are my thoughts? (I will stick with just the standard for now).

STANDARD DISTANCE – WOMEN
Historically one of the toughest standard distance races in the country, the first 10k run course in Gravenhurst chews people up and spits them out. In the words of Darren Cooney last year, “I kept thinking is this the big hill everyone talks about? Is this one? Or is it this one?”. By the time you hit the bike in the rolling Muskoka hills, your legs are often thrashed. With this race representing the only qualifier for Worlds in Penticton in Ontario, for the standard distance at least, those two spots per AG are sure to be hotly contested. Jasmin Aggarwal is back to grab the title that eluded her last year where she finished 2nd in the standard distance race in Bracebridge (and won the sprint) on her way to the Du the Double prize. She is hot off excellent performances at the ITU World Duathlon Championships in Aviles, Spain (3rd in F20-24) and at the Toronto Triathlon Festival (in the triathlon). Competition for Jasmin will come from Julie Reiter, Worlds team member Tara McAninch McLaren and Renee Hartford, while some intriguing wild cards may make the racing even more interesting on Saturday. Jessica Kuepfer has some VERY strong run times to her name but is bouncing back from IM Muskoka 70.3 last weekend, and Carol Bedley has a relatively recent sub-3:00 marathon to her name. And might we have a Tammy Purdy (defending champion) sighting? If so, that will turn the race on its head. My money is still on Jasmin Aggarwal to take over the top of the podium this year. Of course this is the women’s race, so 4 completely off the radar athletes will show up and completely upset the dynamic. 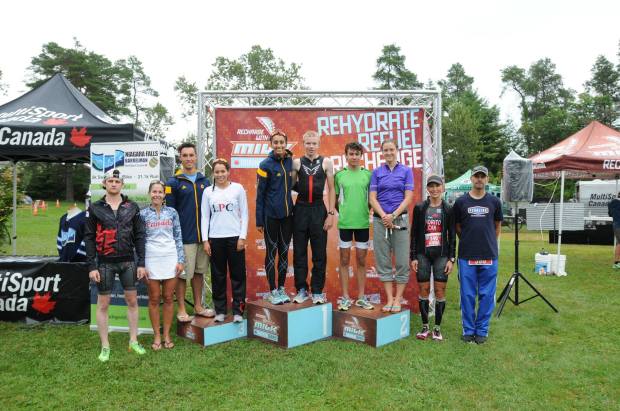 The podium from Bracebridge in 2015, featuring several 2016 contenders!

STANDARD DISTANCE – MEN
This seems to be the race that everyone is keyed up for, and for good reason. Ever since I raced in Ontario, the provincial championships have been a major focus for the men’s duathlon field. Last year, youngster Brian Moore doubled back from the sprint to win the standard distance as well, taking home the Du the Double prize. He will attempt the double again, as will last year’s runner-up Matt Straatman. The race will likely be missing last year’s bronze medallist Larry Bradley, who may opt for only the sprint, but may very well gain the talent that knocked Larry off the top of the podium in Welland (Sean Delanghe). Also of note is Charles Bedley entered in the Double; Charles is a hell of a runner (30:43 10k/2:16 marathon in his past) who has been cropping up on the Ontario duathlon scene regularly the past several years, so this is in no way new to him. When Charles is on the start line, he usually shows up ready to win. On a course with as tough a run as Gravenhurst I predict that really strong runners to have an edge on this day, and I would say these four are the most accomplished runners in the field. That’s not to say that Gravenhurst regular (and National 6th-placer) Andrew McLeod, long course specialist Daryl Flacks, and Garvin Moses (who is en feugo right now) won’t have something to say about that. Unfortunately, Jeremy Carter has been forced to pull out of the race due to injury. Other athletes to keep an eye on include Steve Beasley (who WON M60-64 at Worlds this year), Spencer Summerfield (accomplished MSC duathlete making his standard distance debut at this race), Mark Cullen (Boston Qualifier venturing into multisport this year), Mike Park and Kevin Gallagher (teammates who always present a fun battle to watch). Special shoutout to Bob Wild representing M75+ in yet another provincial championship! Now the hard part: (1) Brian Moore (2) Matt Straatman (3) Sean Delanghe (if he shows, Bedley if not). It’s hard to bet against Moore after last year, even if he hasn’t raced much at all as far as I can tell.

Brian Moore at Bracebridge in 2015

Matt Straatman at Bracebridge in 2015

I am going to leave it at this for now, because I’m sure many of you are ready to stop reading. If I can find a bit of time this weekend, I will try to put together a sprint race preview. At the very least, I will edit this one to include a Du the Double preview. Time is at a bit of a premium right now, and I race twice again this weekend…

BLOG UPDATE
If you are waiting for the race reports from Great White North (where I got my butt kicked by Evan Bayer and finished 2nd in a subpar time) and Alberta Provincials at the Comfortec Red Deer Duathlon (where I did everything good I can think of an won another provincial title), you’ll have to wait. This is by design! My big races this year happen in a span of 18 days from August 24 to September 10. This is a pretty WTS-style stretch of racing that I have never really put my body through, so I took the opportunity to simulate it in July when several races that I had my eye on happened to fall in a 14 day stretch. I raced GWN on July 3, Red Deer on July 9, and will race what is essentially a two-day duathlon on July 16/17 when I do the Alberta Road 5k Championships on Saturday and a 25km ITT on Sunday, and I want to evaluate them as a group rather than in isolation. So stay tuned :).