Time for a little history lesson. Let’s go back to 2012, my first year as a duathlete. I had circled MultiSport Canada‘s Cobourg stop on my schedule, to qualify for Worlds in Ottawa at the race that had been awarded the Ontario Championships. But let’s be honest…I wanted to win. I lost seconds on each leg and was beaten into 2nd by 57 seconds by Kevin Smith (in 1:59:35). 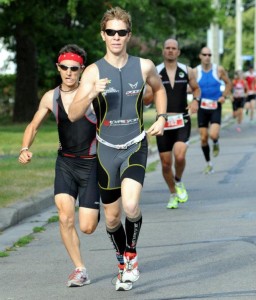 Duelling with Kevin Smith in Cobourg

Fast forward to last May: I went to Iron Hawk (the Ontario Sprint Duathlon Championships) with vague designs on getting the provincial title I missed out on the previous two years (Belle River in 2013 didn’t fit into my schedule logistically)…yet on race day I was foiled by names such as Sanders, Bechtel, Forbes and Loewen. On July 18, 2015, however, I would not be denied…even if I was racing in a different province than previous years.

ALBERTA PROVINCIAL DUATHLON CHAMPIONSHIPS RACE REPORT
I circled the Victory Duathlon a few months ago when I found out the ATA had named it the provincial championships, hoping I could take a shot at that elusive title. Originally, the format was to be a 5k/40k/10k…inverting the runs of the standard distance and making for a good but not perfect prep race for Nationals in September. So the late change that swapped the race distances and preserved the international standard distance was welcomed by me. Not to mention the fact that the massive rainstorm that was supposed to hit on race day came a day early!

The day started early enough, and happening upon a rollover accident, a convoluted construction detour and a freight train didn’t stop me from being at the race site before transition opened. Being the superstitious athlete that I am, I chose to forego my bike mechanical run-through on the road and give my bike a static check on the rack. Then off for my run warm-up on the course with a few race pace accelerations. Ritual, ritual, ritual.

RUN #1 – 35:01 (~9.8km, 3:34/km STRAVA FILE)
I went off strong, but under control. 10km is a long way to go, and I didn’t want to go about biting off more than I could chew by ripping a 3:07 first kilometer. I had some welcome help the first lap of the two lap run course, as a few of the athletes from the sprint race paced off me which helped me to keep the pace steady at ~3:33-3:34/km. Other than that, the run was pretty uneventful as I just tried to hold my pace, focusing on smooth running form, hydration and nutrition. There is still some room for improvement on my running. 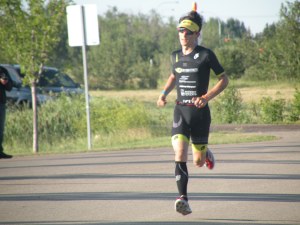 BIKE – 1:01:30 (T1 + ~39km + T2, 38.7kph STRAVA FILE)
I have to give kudos to the organizers here; they could have given us a course full of long, single loop out-and-back sections, but instead they chose to give the athletes a true Worlds-like feel for this Worlds qualifier by creating a very spectator friendly, looped course that featured a two lap first run, four 10km laps on the bike, followed by a one lap final run. Because of this, my grandparents and my aunt were able to come out to the race, and see me compete throughout the day instead of sitting out in the wind for two hours just for a few sightings! 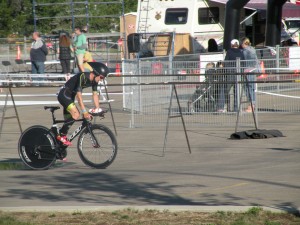 On the flip side, this did make for a bike course that was a tad slow. Add to that the fact that the way out featured a net downhill and a hard tailwind, with an uphill drag into a headwind back to transition, and it made for an uneven ride. My average speed would spike above 40kph on the fast section before dropping back to the 38’s by the time I completed each lap! I put in a very consistent ride, coming in with lap times that were very close to the same on each lap, and came into T2 after putting my stamp on the race with another very solid bike split. 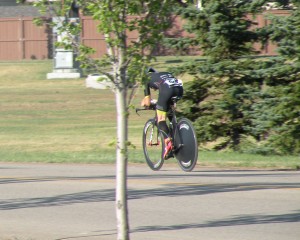 RUN – 18:23 (5km, 3:42/km STRAVA FILE)
Now, over the course of the bike leg I couldn’t help but notice a figure in black I recognized from the duathlon start line who seemed to be making headway on me on each lap of the bike. This motivated me to push on the bike, and starting the 4th lap it dawned on me that there was a good chance I would stay away for the win (barring a major blow-up on the run). Not knowing my competition very well, however, gave me some impetus to work hard on the second run to secure my first major championship. 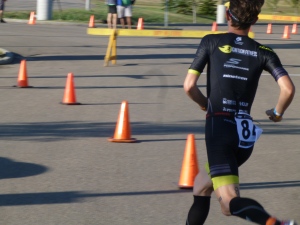 Simply stated…I was a bit of a mess on the second run. To be fair 5 seconds/km slower than the first run is a pretty solid day at the office for me, as I am usually 10+ seconds/km off my first run pace after a strong ride. So to run that close to my first run pace after such a strong ride is encouraging. The second run was a mixture of emotions and pushing through the effort left in my legs from the bike. Coming to the finish felt like a dream, and as I crossed the line I pumped both fists and broke down a little bit. A huge smile was plastered on my face. 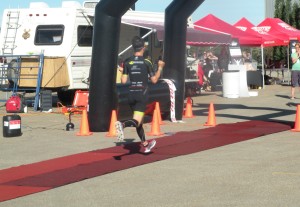 This one was a long time coming, but I did have to earn it. The figure in black I kept seeing on the bike was Moritz Haager, a former triathlete (and blog reader!) who turned to duathlons this year and recorded a VERY solid 1:59:13 finish. This is a name to file away in your memory banks folks, as he put in a very steady all around race. Also of note in 3rd place was Liyang Wang finishing in 2:03. Liyang is from Ajax but is out here in Alberta doing an internship…a name to watch for my Ontario readers. Very solid performances you two! 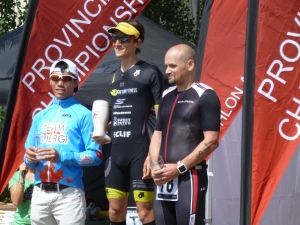 This was a very big day for me. In a race that was meant to be an international distance tune-up for Esprit, I was able to put together a very solid start to finish performance…can’t ask for more than that! Thank you to the race organizers and Alberta Triathlon who put on a very solid event with a Worlds like feel, an awesome development for a Worlds qualifier such as this. And as always, my equipment and support crew put me in the best possible position to succeed: my 3SIXTY5 Cycling FAT 60 once again helped me deliver the top bike split on the day (across all disciplines)…if you are looking for a good set of race wheels, check them out (and use discount code “jesse-2015” to receive $50 off)! My Skechers Performance GOMeb Speed 3’s have quickly become my favourite racing shoe. And of course, I am proud to represent Ignition Fitness at venues across Canada. Tommy really has helped me reach another level. 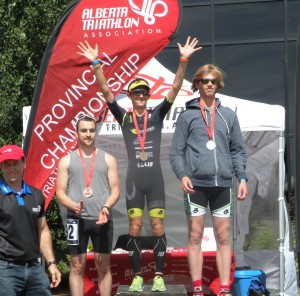 I’ll be heading back to the Bat Cave for the next 6 weeks to prepare for my next challenges…looking forward to the journey. So until next time…keep Du’ing it!