I was not originally going to do this preview, planning to opt for Belwood instead. But after my Belwood preview fell through and I got wind of a fresh field shaping up for the Gravenhurst International Duathlon, I decided to make it up to y’all by doing a preview. What makes it more intriguing is the fact that Gravenhurst is going to be the first really big duathlon of the season in Canada, and will be followed in close succession by Magog and Charlevoix on July 25/26 (not to mention the Victory Duathlon in Leduc this weekend, where I will be racing). The sprint distance is relatively well developed this year, with 10 sub-1:00 performances already this year, and with a late date for Nationals July is a perfect time for those who fancy themselves contenders to show their faces at the longer distance. Currently, our own Daryl Flacks has the best recorded time in a sanctioned 10k/40k/5k race, with his 2:04:25 at Belle River, though that will surely change over the next two weekends. First, a little bit about the course.

COURSE PREVIEW
Gravenhurst is a tough course, especially for the international distance. The run is a tough out and back full of nasty little pitches and no relief from the sun and heat. The forecast is calling for ~20 degrees and not much wind, but on an exposed course (even moreso with the new bike course, or so I am told) the sun can have a dramatic effect. The new bike course is a wild card, but it looks to be similarly rolling to the old course, it not a little flatter overall. Times will likely be faster this year, due to the bike course and the stiffer competition. It is most definitely a course that favours strong athletes, and the day will tell us who has been eating their Wheaties!

These two get a bit of a bump over the rest of the field, due either to performance or uncertainty. Flacks actually currently holds the fastest sanctioned international distance time in Canada right now, at 2:04:25, and he can groove pretty well over the longer distance. McLeod is a veteran of this course who knows the roads well, and even with the new bike route he will have the benefit of experience. The last time these two raced the gap was less than 90 seconds, and both are strong athletes built for a long haul…perfect for a course like this. 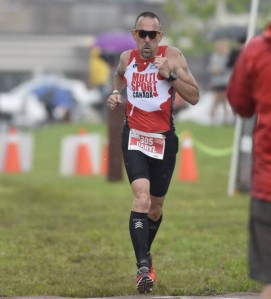 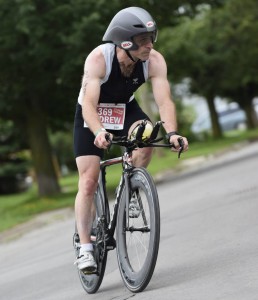 These two will make it interesting for each of the top 5 positions, two athletes defined by steadiness. Walker continues his successful comeback from a year off racing due to heart issues this year, with his lethal bike (on perhaps the cleanest set-up in Ontario) slowly coming back. Look for Walker to use his strength to push Flacks and McLeod hard. Gallagher is trying to race himself into duathlon shape after a spring of marathon racing, though his legs weathered by several years of Cabot Trail Relay racing will be well suited to this undulating run course. 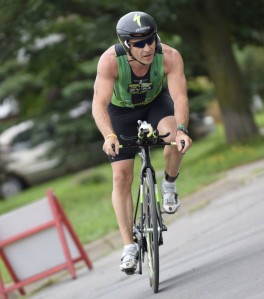 HOWIE BRING BACK THIS HELMET! It broke my heart a little to see you in a Rudy Project at Belwood…

THE BREAKOUT ATHLETE OF 2015
Darren Cooney

I think Darren will be the one to shake up the standings this weekend, as he really has become a model of consistency. Since Lakeside last year (and maybe before), Darren has proven to be the one to pick up the pieces. A late bloomer in the sport, Darren is coming off the high of his first overall win in Guelph last month. Steady as can be, Darren will likely upset the finishing order of the top 5 come the finish on Saturday.

Darren, I am expecting a smile just like this in the finish line photos this weekend!

CONCLUSIONS
A dark horse could come out of the weeds for sure, but I don’t see all that many more making the trip to Gravenhurst with one to Bracebridge on tap next month. Many of these athletes sure to be present on Saturday have either raced light race schedules this year or are named Flacks/Walker (ie. bulletproof to racing every weekend). The heat and exposure could play a big factor in how the front of this race plays out, but I think recent history puts Flacks in the driver’s seat for this one. McLeod will be less than a minute back and ready to pounce if Daryl doesn’t figure out the hydration issues that plagued him in Belle River and suffers in the heat.

The battle for third will be interesting as well, though I don’t think the other three will be quite in the same ballpark as the front two. My bet is on Walker to take advantage of the tamer bike course to be the best of the rest as he continues his comeback, with Cooney moving past Gallagher and nearly reeling in Walker on the run. A resilient race might even see Darren crack the podium, but I’ll lean to Walker’s pedigree and experience here. These 3 could easily finish in any order on this course, so I don’t feel very confident in these predictions…

As for times, I can’t see them being earth-shattering…the course is too much of a bear. I would lean towards a war of attrition here. 2:07-2:08 should win, with 2:08-2:09 good for second and 2:10’s to round out the top 5. Those times are likely worth 3-4 minutes faster on a more favourable course. Guys, pay attention to the little things like core temperature and getting enough electrolytes in. Gravenhurst isn’t a course to be tough on!

Let’s see how these go! I’ll be watching with interest. Until next time, keep Du’ing it!